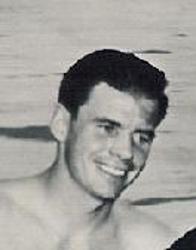 An early pioneer of water skiing in Minnesota, Frank “Frankie” Beddor learned to ski in 1950 after seeing some of the top skiers in the world perform in the Cypress Gardens Ski Show in Florida.

He and his family skied behind a 33 HP outboard at their cabin on Balsam Lake, Wisconsin. On July 4, 1950 they put on their very first ski show, calling themselves “Sue Beddor’s Ski Bums,” starring Sue, Judy, and Frank Beddor and friends. They were pulled behind a 16’ Correct Craft Dart.

In 1951 they formed the “Ski Antics” water ski show, performing throughout the five state area on weekends and holidays. 1953 brought along a second show, “Ski Antics of 1953” at Bar Harbor, Minnesota. Their first theme was “Anybody Can Ski” and featured many new and different acts: a ski jumper who was blind since birth, a disabled slalom skier, children on skis, and Frank’s dog Rowdy on an aqua plane. The girls in the show were called “The lovely Ski-Ettes.” They performed in solo and doubles acts, made pyramids, and were clowns. Many jump acts were featured: long distance; over and under; and jumping thru a ring of fire. The jump was 8’ wide and 6’ high. Music was provided by a singing quartet called “Par Four”.

One of the country’s first barefooters was a Ski Antic, as well as one of the first flat wing kite flyers. Many of the skiers went on to perform at Tommy Bartlett’s show in the Wisconsin Dells, and at Cypress Gardens. In May of 1953, Frank set a world water ski distance record by skiing from Lake Itasca, Minnesota, the headwaters of the Mississippi River to New Orleans, a distance of 1800 miles, in 12 days. He was pulled behind a 16’ AlumaCraft powered by twin 25 HP Evinrudes. Along the journey he and his support crew would put on ski shows for the local river towns. The stunt was to promote the vacation facilities available in the Brainerd Lakes region. And to do so, Beddor skied in a Paul Bunyon costume for the journey.

The Ski Antics performed before huge crowds in the Minneapolis Aquatennial water ski thrill show from 1954-1957 on the shores of Lake Calhoun. A full line of Ski Antics water ski equipment was manufactured in Minneapolis. Products ranged from water skis to ropes and life jackets. At their peak, the show had 29 skiers, 4 boat drivers, 15 Ski-Ettes, 2 announcers, and the Par Four singing group.

1957 was the Ski Antics’ last summer. Frank got married and retired from skiing and has not been actively involved since then. Frank Beddor and his Ski Antics show group were one of the first clubs to give the sport of waterskiing broad exposure in Minnesota. Their shows prompted others to learn to water ski, form their own clubs, and put on shows and tournaments.

Even though his active involvement in water skiing lasted only a few years Frank was a pioneer skier and holds a deserved place in the Minnesota Water Ski Hall of Fame.