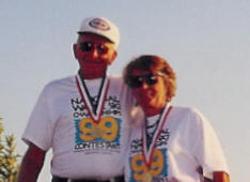 To say Fran and Roy Hagen you also have to say “The skiing Hagen Family”. They have been a mainstay in Minnesota water ski competition since 1961.

Fran and Roy have been married since 1948 and have four children, Ron, Nancy, Wayne, and Gary and many grandchildren. They live in Edina and ski at their lake home on Dutch Lake in Mound, MN.

They learned to ski in 1958 at their family cabin on Cross Lake. Fran couldn’t get up on skis for the first time and was black and blue from the waist down for a week after. Roy had better luck than Fran did. He was the first in the family to learn to ski on a single ski.

After attending a Minneapolis Aquatennial water ski tournament at Lake of the Isles in Minneapolis, they decided they could ski as well as anyone competing. Later they ran through a slalom course locally with some people who encouraged them to get involved in competitive skiing.

Winning these first tournaments gave them lots of enthusiasm for the sport. They won most of the tournaments in 1963 and qualified for the Nationals in Long Beach, California, traveling by train, which was day and a half trip. They figured they had better go since it may be their only chance.

All of their children competed on local, regional, and national levels. Gary won Jr. Boys Jumping and third in tricks at the 1970 Nationals in Canton, Ohio. Nancy was the South Central Women Slalom record holder in 1979 and has placed as high as third nationally.

The family started snow skiing in the 1960’s to stay in shape for water skiing. They’ve been skiing at Trollhaugen and for 30 years at Wild mountain ever since. Fran and Roy are both Professional Ski Instructors of America (PSIA) rated instructors, teaching four times per week, and they race on Sundays with the “Wild Bunch” team.

Fran and Roy Hagen richly deserve spots in the Minnesota Water Ski Association Hall of Fame for their enthusiasm and dedication to the sport. As Fran once said, “One thing that’s nice about water skiing is that it’s friendly competition. Everyone is for everyone else, and you get a chance to make a lot of friends.”