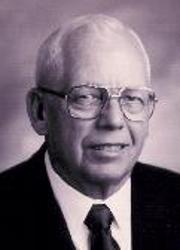 Jim grew up on a farm in Bloomington, MN and first learned to ski in 1955. Frank Beddor, who had a ski show at the time, was an influence to him in his early days of water skiing. Jim, his wife Nancy, and their children started going to Prior Lake in 1955 to boat and water ski. In 1956 they bought a cabin on the lake and have been skiing there ever since.

Jim and Nancy now live year round on Prior Lake and he is often the first skier on the water after ice out and the last skier off in the fall. 7:00 AM is a busy time of the day for Jim during the summer as he faithfully drives and practices with a group of skiing friends.

His relationship with Mastercraft Boats is well documented. Not a tournament goes by that he is not promoting, whether towing a boat or wearing Mastercraft clothing.

In the off season Jim spent 29 years on the National Ski Patrol at Buck Hill, and is active in Prior Lake community affairs by serving on the city council.

The Minnesota water ski community couldn’t ask for a better member than Jim Petersen. He’s been active since the 1950’s and to this day lends a tremendous amount of dedication and enthusiasm to the sport.