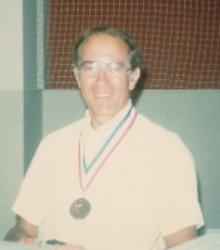 Resident of White Bear Lake, his hometown. He grew up on Bald Eagle Lake, where he still lives. First learned to water ski in 1948 at the age of 22. In 1951 on their honeymoon, Tom and his bride Anzle bought their first boat in Winnesquam, New Hampshire, a 15 foot fiberglass runabout with a WWII 50 HP Evinrude engine designed for use on storm boats.

Retired mechanical engineer with Hamm Brewing Company and 3M. Marrried to his next door neighbor Anzle (dec. 1995 ), and now to Ida. Father of Paul, Ross, Steve,  and Evelyn, all skiers in their own right. Grandfather of  6.

Tom also enjoys snow skiing, being a veteran of 25  years with the National Ski Patrol at Wild Mountain,  and was a winter resident of Aspen, Colorado.

Tom has always been known as one of the top skiers in the state of Minnesota, the mid west, and the nation. He loves the sport and the people involved in it. He’s never at a loss with something good to say about skiing, from the early days to the present, and is an inspiration to everyone. 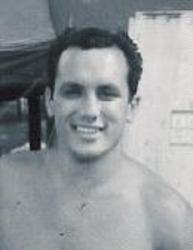 Nito learned to ski in 1952 at the age of 14 on Lake Owasso and was taught by a neighbor,  Jarle Leirfalom, who was then the Minnesota DNR Commisioner. After serving in the US Navy,  he joined the Bald Eagle Water Club around 1958. He is currently a resident of Shoreview  where he grew up and still  lives on Lake Owasso.

Nito, with his former wife Joy, raised 3 daughters Coral, Liana, and Maile,   on Lake Owasso.  They all skied with the Bald Eagle Water Club Shows and competed  in tournaments. He’s a former  employee of  Saucier Ski Company, and a retired truck driver.

He’s been known as a top skier, judge, and driver. Nito has been involved at all levels, from the local club level, volunteering with The Courage Center, to the national Tournaments and serving on national boards. He’s never shied away from doing things and has shown great enthusiasm and opinion in doing so. Nito has and continues to serve the sport of waterskiing very well.